Innovative brewery is an experimental brewery that unites a community of people who wish to create non-traditional sorts of beer. We keep up with the time, creating tasty and not ordinary crafts beer from the most qualified initial products.

We have reached our purpose acquiring modern experimental and innovational brewery we have dreamt about. Brewery where all our passion as well as part and parcel of our soul has been put. It has been projected flawlessly and maintained due to the well-coordinated labor of all the team of BEERMASTER BREWERY.
As a result of the persistent creative search and acquisition of the oldest recipes, we succeeded in running traditional local Beltsy beer for the welfare of the wide public. We use only selected malt, the best sorts of noble hop, top-quality pretreated water in compliance with German standards of quality, a special yeast strain Weihenstephan imported directly from Munchen to ensure the highest quality.

BEERMASTER WEIZEN is a refreshing unfiltered wheat beer brewed in a classic German style, strictly according to the Reinheitsgebot beer purity law of 1516.
The beer has a balanced taste and characteristic banana notes. The full body has a wonderful finish with notes of ripe banana – the top-fermented yeast esters creating that unforgettable wheat flavor. All raw materials and ingredients were brought from Germany. We have used two brands of malt – Avangard and Irex that are world famous for their high purity standards, perfectly balanced color and fermentation parameters.

We got so inspired by experimenting with cherry that wanted to add cherries to almost any beer. However, we’ve always liked the classic styles. Bock beer is one of the most intriguing.
BEERMASTER Cherry Bock is a cherry bock brewed with Munich, Chocolate and Pilsen malt. Fermented with cherries, that offers a strong sweet taste and rich aroma, revealing only a hint of Ahtanum hops.

Steve Gonchar
brewer at „BEERMASTER BREWERY”
“I don’t drink beer that is brewed with syrups and extracts. You can’t fake the cherry flavor. You need the real cherries. “

BEERMASTER Red Cherry Ale is a fruit beer with an addition of natural cherry fruits, brewed according to old recipes of Belgian brewers. We have used only whole fruit in our BEERMASTER Red Cherry Ale and we have used a lot of them in brewing: 200 gr of fresh cherries per 1 liter of beer.
Before starting to brew cherry beer in Balti (Moldova), the team of the BEERMASTER BREWERY plant had to do a hard job of studying all the subtleties and secrets of production. Today the brewery can proudly say that in our country it is possible to produce a cherry ale that is not inferior in taste and quality to an authentic Belgian beer.
BEERMASTER Red Cherry Ale has a refreshing sweetness, fruity bouquet, subtle acidity that comes with aroma of wild cherries and cherry pits.

BEERMASTER Innovation Brewery IPA is the classic “four C” IPA which was brewed using some of the best “new-age” hops. The beer has a distinctive flavor with the hops offering a herbal, peppery kick.

Our BEERMASTER Innovation Brewery Stout picks up some of its sweetness from the Munich malt that we used, which when combined with the dark chocolate and caramel malts, give the beer a chocolate chip notes. But there is also density and bitterness at the beer’s center that keeps it from being a sweet stout.

BEERMASTER Innovation Brewery WEST COAST IPA is the harmonious combination of twelve hop kinds. Flower and citrus complicated tastes of hop Citra and Simcoe have been together to invent the main aroma. In the meanwhile, other ten kinds of hop are perfect in combination with the special malts (particularly, Pale, caramel) bringing out an unforgettable taste.

BEERMASTER INNOVATION Brewery Brown Ale is the brown beer with the strong taste featured with vibrant caramel flavor aimed at balancing hop bitter. The production is well-known for usage of American hop of such sorts as Hallertauer, Nugget, Cascade.

BEERMASTER INNOVATION Brewery Stout is considered to be black mouth-filling beer famous for the taste of coffee along with chocolate given in a combination of three special malts as well as two kinds of hop.

Saison is the Belgium beer from the category of Farmhouse Ale. This beer traces back to the countryside regions of Northern France and Southern part of Belgium, Wallonia. Concerning the recipe of this beer’s preparation, there are no rules except for some principle intended to create this farming beer. In French it would sound like that: «Je ne sais quoi», that means “I don’t know what”.
Instead of malt, different kinds of grain might be used for Saison Ale. Hop, yeasts, and a wide range of herbs and spices are welcome to be taken while creating this ale.

Come in shades of “very little” of everything. It has less calories and lower alcohol content with a thin body and very light taste.

Then we got BEERMASTER INNOVATION Craft Light Lager № 2, the result of a beautiful coupling between our noble hops: Mosaic, Saaz и Hallertauer Tettnang.

Bottom-fermenting, very light, thirst-quenching variety with a pleasant but not saturated taste.

BEERMASTER Innovation Brewery GG Stout is a dense dark ale with a thick creamy foam, a bitter taste with coffee and chocolate tones and invigorating effect. In the XIX – XX centuries, doctors often prescribed a pint of Stout to patients, blood donors and even nursing mothers. 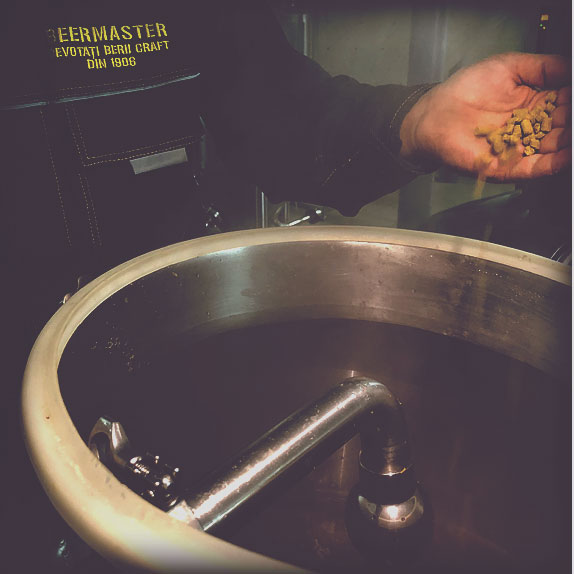 This beer smells like a holiday, it smells like summer. We brewed it for those who want to escape from the city to the beach and catch a wave or spend a summer night away by the ocean. Feel it, experience it and never forget summer adventures!
For each cool moment of your summer, we have created a new BEERMASTER SUMMER ALE, brewed in the heat and for hot summer days. Light, nice and fresh ale for every day from BEERMASTER BREWERY. Blond and caramel malts together with the noble varieties of hops Hallertau Mittelfrueh and Saaz Noble raise the mood! Have a cold pint of BEERMASTER SUMMER ALE for all summer adventures and victories! Brew Up!

Douppelbock means “double bock”. These lagers are characterized by a higher alcohol content, which can traditionally be as high as 10% ABV and sometimes higher. Along with the additional alcohol comes a fuller body and a more pronounced warming quality.
The Doppelbock style was inspired by a strong bock beer brewed by monks in Munich for consumption during the Lent. They called this strong lager Salvator and started selling it to the public during the 1700s. The name “Salvator” was trademarked by Paulaner brewery when new owners took over the original receipe from the monks. As a tribute to this popular brew, many breweries choose names ending in –ator for their Doppelbocks. That is why we choose the name “CELEBRATOR” for our double bock beer.

BEERMASTER Innovation Single HOP IPA series beer is in contrast to the standard practice of using multiple hops in a brew. Instead of using a range of different hops, one single hop is used throughout the various stages of the brewing process, providing the aroma, flavor and bitterness to the beer.
The aim of this experimental, hop-centric series is to demonstrate just how dramatically a single hop can impact a beer. We’re going to periodically brew some single-hopped variations of this IPA just for having some good brewing fun! We invite you to enjoy this single hop experimental BEERMASTER Innovation Single HOP IPA series together with us!